Lake View High School Strength and Speed Camp 2016 Camp Flyer- http://www.saisd.org/docs/athletics_docs/2015-2016/football/LakeViewStrengthAndSpeedCamp2016.pdf   Welcoming all girls and boys that will be entering 7th grade-12th graders Camp begins-June 6th Camp ends-July 21st No camp the week of July 4th –July 7th Camp will be held Monday-Thursday of each week. Times 6:30 am- 8:30 am-Session I 9:00

Soccer season began January 5th with a tough scrimmage against Stephenville. Since then, the Maiden have played 10 games with a record of 1-8-1. Despite the numbers, this soccer team has improved leaps and bounds. The Maidens offense has put up a total of 10 goals so far this season. The Maidens beat Bandera 7-0 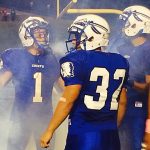 Spring sports are now in season and this year the Chiefs & Maidens will feature an online presence that will cover our schools athletic programs like never before. Stay tuned for more details and exciting news!

No Events This Week

Events are added by athletic staff.
View All Events